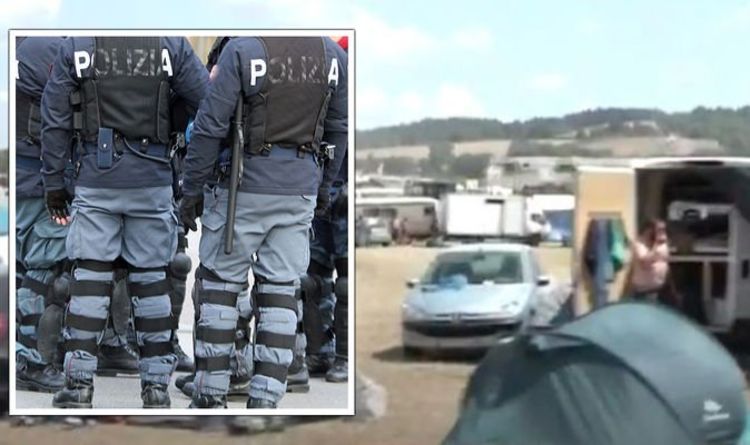 A 25-year-old man, born in London but residing in northern Italy, was found dead in a lake near Viterbo on Monday after participating in a huge rave party straddling the borders of Tuscany and Lazio this weekend. The illegal rave was staged via Telegram and went undetected by authorities.

Sources say about 5,000 people are still in the area, now surrounded by police.

Several cars left the area this morning. Hundreds of people are said to have left the party last night.

All cars leaving the area are checked by police while officers guard the main entrance.

Musicians playing for the general public, meanwhile, show no signs of stopping with booming stereo systems.

The apparently controlled techno music festival has already seen one death and two reports of sexual violence confirmed by police.

The body of the 25-year-old man was found in Lake Mezzano.

We had seen him enter the lake on Sunday evening and never come out.

Police and firefighters dragged the lake before finding his body.

“The persuasion of the Public Security Authority has led, to date, to the remoteness of the area of ​​approximately 1,500 subjects.

“The private (non-public) land, in addition to being particularly large, has been occupied by dozens of trucks and sees the presence of thousands of people.

“In addition, there is dry vegetation, which is easily flammable.

“In a scenario of this type, the intervention would consider a use of force which should take into account the risks associated with the movement of heavy goods vehicles in the crowd.

“In addition, the use of tear gas can cause fires with dramatic consequences.”

Italy reported 54 coronavirus-related deaths on Tuesday compared to 24 the day before, the health ministry said, while the daily tally of new infections rose from 3,674 to 5,273.

Italy has recorded 128,510 COVID-19-related deaths since the onset of its outbreak in February last year, the second-highest death toll in Europe after Britain and the eighth in the world. The country has so far reported 4.45 million cases.

There were 49 new admissions to intensive care units, up from 32 on Monday. The total number of intensive care patients rose to 423 from 404 previously.