EASTENDERS star Louisa Lytton has been forced to postpone her wedding for the THIRD time after contracting Covid-19.

The actress was due to fly to Italy to finally wed her fiancé Ben Bhanvra and exchange her wedding vows this weekend.

Louisa, 33, and Ben have already had to postpone their big day twice as the pandemic put an end to their travel plans.

It wasn’t the third lucky break for the EastEnders star, as she took to Instagram with a bathtime snap telling fans about her nuptials.

Posting a photo of her hen, she explained that they had become a “Covid household” and would therefore be staying home.

“This time last week,” Louisa captioned the post. “Since we have a covid household. Finally on the mend. Not what the doctor ordered. 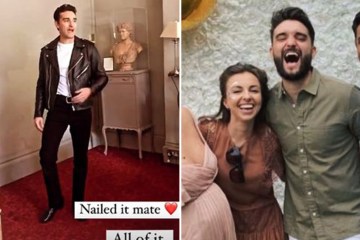 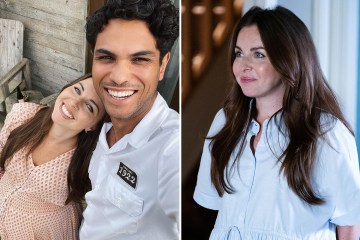 “We were supposed to exchange our vows today before our Italian wedding! Instead, we cleaned up the carpets covered in sick people.”

Staying positive, she concluded the post by tagging her fiancé Ben and writing, “We’ll get there and it will be worth it.”

Louisa then reassured her fans on her Instagram Stories that her illness had seemed “more dramatic than it was”.

“We are going to get married in Italy but we had to make our vows here [England]. Just to cap off a week of covid and another postponed ‘wedding’, Riley decided to pee on my laundry,” she joked.

It comes after Louisa revealed a major career turnaround saying returning to soap is “up in the air” after welcoming daughter Aura.

The actress – who plays Ruby Allen in the BBC One soap opera – said she was enjoying life as a mum and her seven-month-old child was her “priority”.

The TV star, who welcomed baby girl Aura in August, could not confirm whether she would return to the soap, saying she was “not sure at this time” what direction she would take.

Speaking exclusively to The Sun about her return to EastEnders, Louisa said: “Yeah I’m not sure at the moment it’s all kind of up in the air.

“I don’t know at the moment, I just don’t know. Now that I’ve had a baby, that’s the priority.”

The 33-year-old star said she was far too preoccupied with her little bundle of joy to watch any TV – including EastEnders.

“I don’t have time to watch TV at the moment, I watched it to get back to it after 15 years, but I’m too busy now,” Louisa said.