US, EU and allies seek to cripple Russian banks and currency with new sanctions

AFP — The United States and its Western allies on Saturday sought to cripple Russia’s banking sector and currency with a series of extraordinary sanctions punishing Moscow’s invasion of Ukraine.

Taking unprecedented action against a country of Russia’s size and international stature, the allies cut some banks from the SWIFT system, isolating them from the rest of the world.

They hampered the Russian central bank’s ability to use its reserves to support the already sinking rouble, which a senior US official said will now “go into freefall”.

And they have warned that a task force will ‘hunt down’ the ‘yachts, jets, luxury cars and luxury homes’ worldwide owned by oligarchs from President Vladimir Putin’s ultra-rich inner circle, the US official said. .

The measures have been backed by the United States, Canada, the European Commission, Britain, France, Germany and Italy. In a symbolic gesture likely to resonate with Moscow, which is counting on European divisions to dilute Western fury over its invasion of Ukraine, the stunning news first came from Europe.

Far exceeding other sanctions imposed on Russia during Putin’s two-decade grip on power, the sanctions came as the Russian military intensified its bloody and multifaceted assault on Kiev and other Ukrainian cities. Putin says the invasion is aimed at restoring control to a country that has long been dominated by Russia but now wants to rejoin Western institutions.

The group of world powers said in a statement that it was “committed to continuing to impose costs on Russia that will further insulate Russia from the international financial system and our economies.”

“We stand with the Ukrainian people in this dark hour. Even beyond the measures we are announcing today, we stand ready to take further action to hold Russia accountable for its attack on Ukraine,” the statement read.

Saturday’s measures now mean that “Russia has become a global economic and financial pariah,” said the senior US official, who requested anonymity.

He noted that the Moscow stock market had had its worst week on record and the ruble was at an all-time low against the dollar.

“Putin’s government is being kicked out of the international financial system,” the official said.

Cut off from SWIFT, selected Russian banks will not be able to transact without going back in time and using a fax machine or telephone in each case, effectively disrupting their trade beyond Russia.

For now, the SWIFT measure only covers part of the Russian banking network but could be extended, the German government spokesman said in a statement.

“This is intended to cut off these institutions from international financial flows, which will massively restrict their global operations,” the spokesperson said. 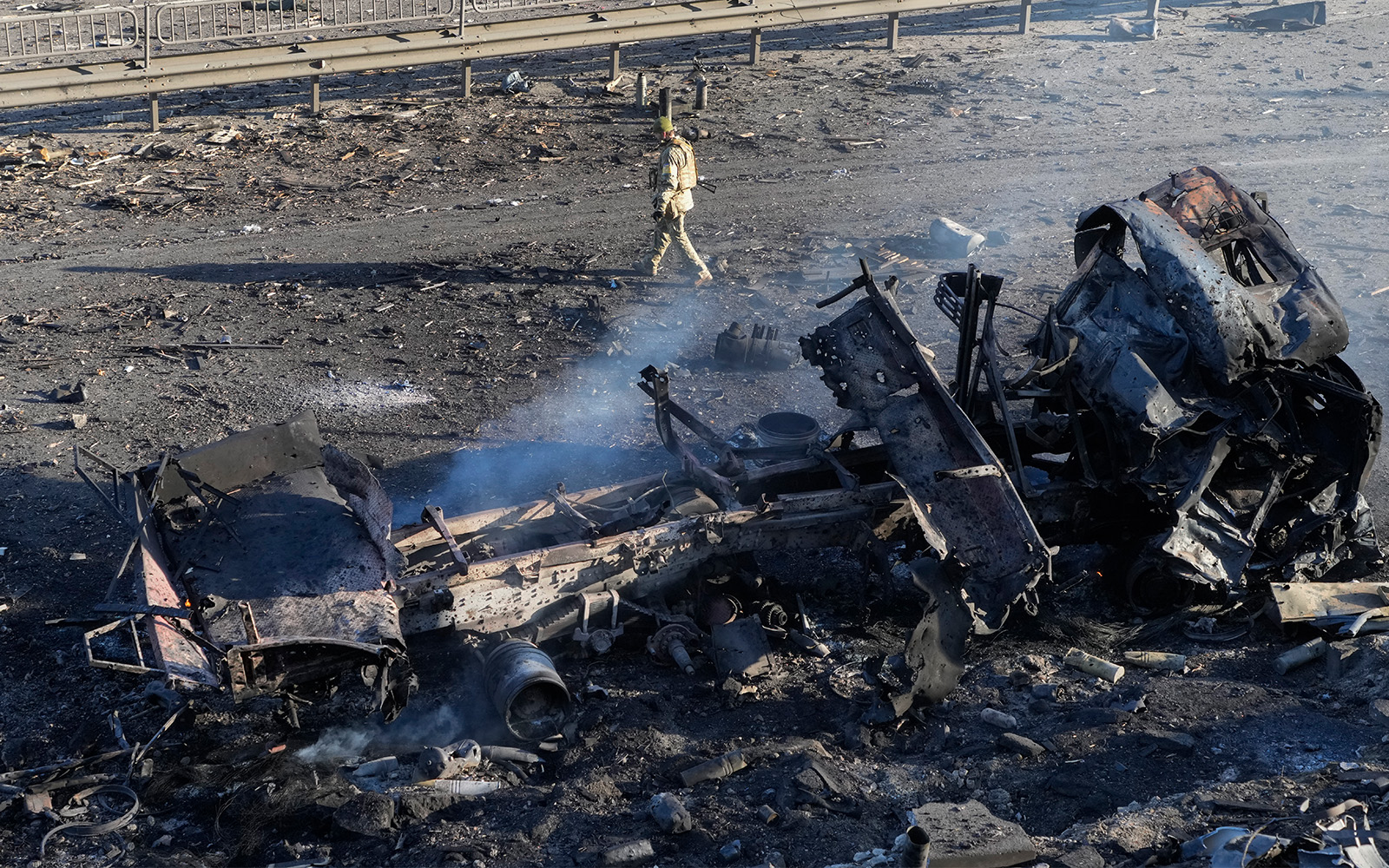 A Ukrainian soldier walks past the wreckage of a burning military truck, on a street in Kiev, Ukraine, February 26, 2022. (AP Photo/Efrem Lukatsky)

The restrictions imposed on Russia’s central bank are aimed at preventing the government from using its huge foreign currency reserves to support the ruble’s fall.

“Russia needs to be able to sell those reserves and buy rubles to support its currency,” but “without being able to buy the ruble from Western financial institutions… the ruble will fall even further,” the US official said. “That means the Russian central bank cannot support the ruble, period.” 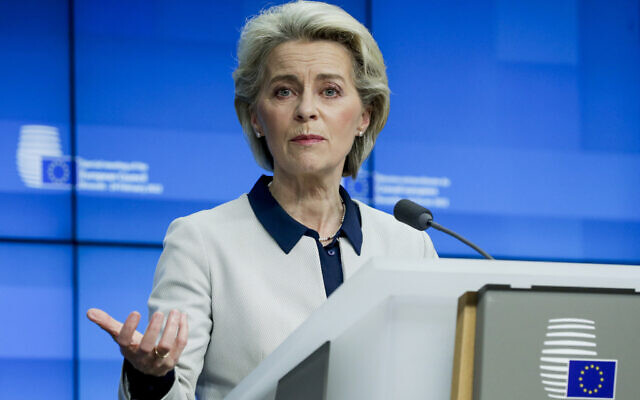 “Putin has embarked on a course to destroy Ukraine, but what he is also doing, in fact, is destroying the future of his own country,” von der Leyen said.

“Once again, in the center of Europe, innocent women, men and children are dying or fearing for their lives. We condemn this barbaric attack and the cynical arguments used to justify it,” she said.

“Russia’s target is not only Donbass; the goal is not just Ukraine, the goal is stability in Europe and the entire rules-based international order. For this, we will hold Russia responsible.

The phenomenon of wealthy Russians who protect their wealth in luxury assets across the West, often in posh parts of Europe, will also come under attack.

The so-called golden passport system for gaining EU citizenship will be scrapped, while a US-EU ‘task force’ will seek to identify and freeze hidden wealth. Putin’s allies will be barred from foreign luxuries, including “their ability to send their children to luxury colleges in the West,” the US official said.

The Western allies said in their statement that they also intend to coordinate against disinformation and other forms of “hybrid warfare” that Putin has used in his increasingly dangerous confrontation with the West.

The US official said further sanctions were being considered and it all depended on Russia’s next moves in Ukraine.

“This is Putin’s war of choice,” the official said. “Only Putin can decide what additional cost he is willing to bear.”

Times of Israel staff contributed to this report.

You are a dedicated reader

We’re really glad you read X Articles from The Times of Israel over the past month.

That’s why we started The Times of Israel ten years ago – to provide discerning readers like you with must-read coverage of Israel and the Jewish world.

So now we have a request. Unlike other media, we don’t have a paywall in place. But since the journalism we do is expensive, we invite readers to whom The Times of Israel has become important to support our work by joining The Times of Israel community.

For just $6 a month, you can help support our quality journalism while benefiting from The Times of Israel WITHOUT ADVERTISINGas well as access Exclusive content only available to members of the Times of Israel community.

Thank you,
David Horovitz, founding editor of The Times of Israel