Italy time
Home›Italy time›What time is it? Your answer is revealing

What time is it? Your answer is revealing

There are many answers to the question ‘What time is it?’ but most of them miss the mark. Perhaps the only correct answer is a question in itself: “Where?”

The Colosseum in Rome at sunrise, minutes after I finished writing this article.

Traveling in Europe, and in particular in Italy, makes you think about time in different ways. To visit Rome is to remember that the ancient Romans believed that this city was the center of the world, according to the expression “all roads lead to Rome”. Of course, that was an age before telecommunications, when people couldn’t simultaneously talk to someone else at a different meridian across the world only to find out that the sun was at a different angle on the horizon there -down, thus signaling a different time of day at this very moment than what they were experiencing themselves.

This lack of hindsight was partly responsible for the egocentric way of thinking that would dominate Western civilization until the 20th century. The 20th century saw a revolution in telecommunications, bringing us devices like the telephone and satellite television that allow simultaneous communication across time zones. The 20th century also gave us Einstein’s theories of general and special relativity, both of which demonstrated that time itself is not a constant but rather context-dependent and dynamic.

These advances were necessary to establish what neuroscientists call theory of mind among a critical mass of people: enough to bring us into a new postmodern era, where it is understood that nothing – neither the Earth, nor the Sun, nor any person, group or institution – is at the center of the universe .

This New The understanding of existence, which is actually not new but is now realized by a critical number of people, is threatening on many levels because it bursts our narcissistic bubble. Pisa-born Italian astronomer Galileo discovered it when he empirically validated Copernicus’ heliocentric theory and was nearly executed by the Church for it. 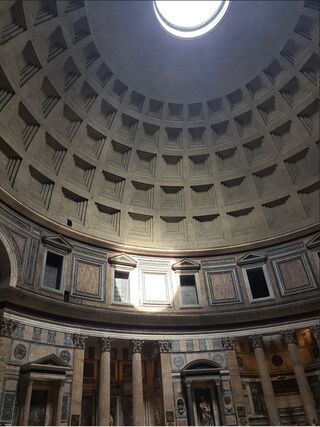 Sunlight passing through the Pantheon’s oculus indicates the time and day.

Narcissism first develops in its self-centered form and then gradually evolves into a group-centered or tribalist form. This tribalistic form of narcissism is what makes people fall victim to the fear of “the other”, which has led to the violence our species has been inflicting on itself ever since. time immemorial.

The good news is that there is a simple remedy for both self-centeredness and tribal forms of narcissism that still plague our species in the year 2022 CE (or is it the year 5782 of the Hebrew calendar…or the year 4720 of the Chinese calendar?).

This remedy does not take the form of a pill or even a type of therapy, but rather, it takes the form of a question, a Zen kōan, to ponder:

What time is it?